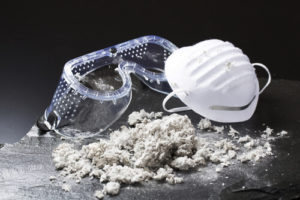 The etymology of Asbestos is derived from the Greek word “a-sbestos” and directly translates to “unquenchable”, “inextinguishable”, or “indestructible.” It is a naturally occurring salt-mined mineral with a signature characteristic structure—long, thin fibrous crystals composed of millions of miniscule fibers. The two most common types of asbestos come from serpentine and amphibole rocks, with each type containing an associated subset of fibers.

The mineral was used extensively in the United States in connection with residential and commercial construction and renovation projects from the early 1940s through the 1970s. It was touted by manufacturers as a highly-effective and inexpensive fire-retardant material and insulator. Unfortunately, driven by their undaunted motive for profits, the manufacturers concealed to the public the lethal association known between inhaling asbestos fibers and developing deadly cancer.

All types of asbestos cause cancer in humans. No threshold has been identified for the carcinogenic risk of asbestos, including chrysotile.

What are the characteristics of asbestos?

When products containing asbestos are exposed to friction or contact, the asbestos fibers will split, fray, and become airborne, releasing tiny fibers that are inhaled into the lungs or ingested in the stomach.

Chrysotile asbestos, or “white asbestos,” is derived from serpentine rocks and has more flexible traits than that of amphibole-type of fibers. Because of its less rigid profile, chrysotile has been historically woven into fabrics due to its fire and heat resistant qualities. It is the most commonly used form of asbestos and can be found in brake linings, gaskets, boiler seals, and in the roofs, ceilings and walls of homes and businesses.

The other five types of asbestos are derived from Amphibole rock fibers, which include amosite (brown asbestos) and crocidolite (blue asbestos). Amphibole fibers are straight and longer than chrysotile fibers and studies have suggested take less exposure than amphibole asbestos to cause cancer.

Amosite asbestos can be found in plumbing insulation, ceiling and floor tiles, insulation boards, and gaskets. Crocidolite asbestos, commonly known as the most deadly form of asbestos, is found in fire roofing spray, insulated wires, millboards, and cement sheets. An estimated 18 percent of crocidolite miners have died of cancer from asbestos exposure.

What are the dangers of exposure to asbestos?

Leading health agencies in the United States, including the U.S. Department of Health and Human Services, the Environmental Protection Agency, and the International Agency for Research on Cancer, all classify asbestos as cancer-causing substances. The primary illness caused by asbestos exposure is malignant mesothelioma. It is a rare, incurable cancer that forms on the thin protective tissues that cover the lungs and abdomen. The disease can take 20-50 years after exposure to develop. As the cancer spreads through the outside layer of the lung, it virtually prohibits the functions of the organs—breathing or pumping blood—resulting in extreme pain.

Exposure to asbestos can also cause asbestosis (a scarring of the lung tissue) and cancer of the lung, ovary, colon, or larynx. Again, studies have shown no definitive amount of exposure capable of causing these lethal diseases.

Harford, P.C., is currently accepting cases of individuals harmed from exposure to asbestos-containing products. If you or someone you know has been diagnosed with mesothelioma, cancer, or asbestosis after exposure to asbestos, please call us immediately at (212) 390-8983 for a free consultation.